Take a moment to think of the representations you’ve seen of children who were adopted or in foster care throughout your lifetime. Television, movies, news stories, and social media have often portrayed these youth using stereotypes. Children who are part of “the system” are usually shown in one of two ways. They are often depicted as disadvantaged kids with struggles that they can’t overcome. These troubled youth lash out at anyone who wants to be close to them to push them away. Or these young people may be portrayed as “miracles” after they have actually achieved some level of success. Adoption is sometimes depicted as a reward after great hardship, such as in the films Annie or The Blind Side. This tip sheet discusses how stigmas and stereotypes affect those in care and their families, as well as how to overcome these difficulties. 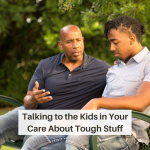 FAW: Talking to the Kids in Your Care About Tough Stuff